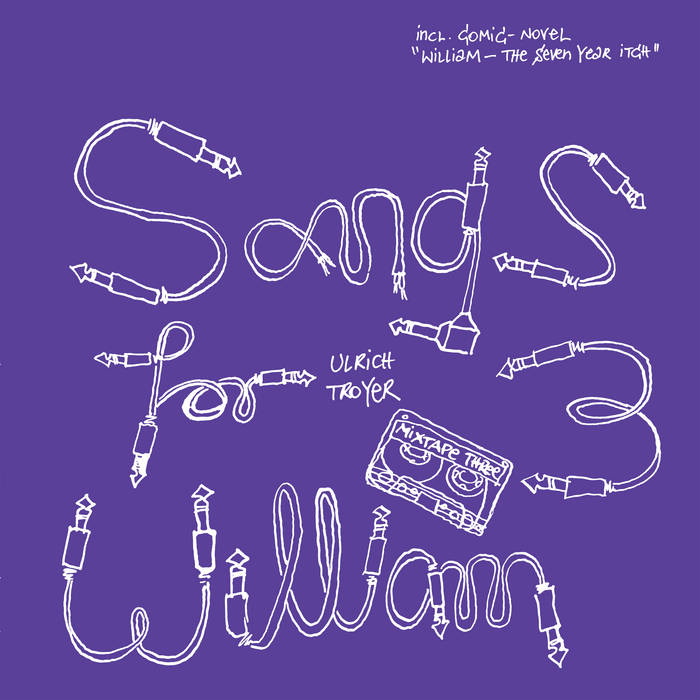 With „Songs For William 3“ Ulrich Troyer presents the final part of his experimental dub trilogy. The hand-drawn bonus track is entitled „William - The Seven Year Itch“. A comic novel narrating the story of a breakup from the perspective of a stomp box called William and a MS-20 filter clone named Charlotte.

The music of the album is oscillating between euphoria and depression - fascinating with hypnotic lines and solos played by various analogue and modular synthesizers, stomp boxes and effect units, recharged by sprinkles of guitars, melodica, talk box & vocoder. All ingredients are rooted in a massive and warm bass fundament and refined with forward thinking dub excursions. This time the project was not only supervised but also co-produced by Kassian Troyer (Dial). His crucial ears and suggestions and the final Stem-Mastering were significantly responsible for the unique overall sound character of the climax of this experimental dub trilogy.

The hypnotic opening track At Muff’s Place arrives melancholic and introverted, evoking smoked out nights and all night long connections. Back On The Market with it’s skanking offbeat chords and the charming vocoder line, lifts the mood of the album towards euphoria - William seems to be dating again. The irresistible groove of Dark Roots makes a deadlock impossible. Megalomaniac Microsynth slows down the tempo of the album and gives space to inventive future dub treatment. The catchy 8-bit & cyber-horn driven track Horny Chiptunes picks up the pace again. The journey continues with a G-Funk-feel infected track entitled Cruising Down The Belt featuring a talk box and an alpha juno synth strings line - perfect for playing on car sound systems while driving aimlessly through the city. The backlash of depression hits again: I Miss Your Noise is heavily featuring a paraphonic MS-20 and culminating into a big shoegazing Kraut-Dub drone. Alone On A Crowded Bus forms the sad and disturbing, but nonetheless beautiful end of this unique and fascinating journey.